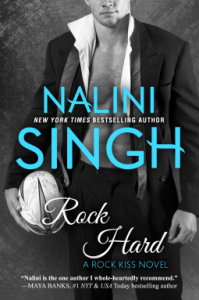 Nalini Singh’s Rock Kiss series has been a fast favorite of mine ever since I read Rock Addiction in early summer. I quickly snapped up Rock Hard soon after it released, but I kept putting it off because something in me is so slow to read heartbreaking romance, even if I wind up loving them. I guess it stems from my dislike of showing weakness (I was raised with two brothers, okay. If you are an only girl you know what that’s like) and crying and I knew that Rock Hard would be a heartbreaking, gut-wrenching read and I was absolutely right. I think I went through half a box of Kleenex (and even typing up my notes made me sniffle. Dammit!) but Charlie and T-Rex were so worth the runny nose, swollen eyelids, and insomnia.
Charlie is so brave and awe-inspiring, but she can’t see it.

I’m not one for timid characters that put themselves down, but Charlie is an exception. She is emotionally scarred from a terrible experience she went through in college. To explain her past would mean spoilers, but trust me when I say that the fact that even leaves the house at all means she is a lot stronger than she gives herself credit. If anybody needs to give herself a break and to stop beating themselves up for every little mistake they make, is this woman.

Pathetic, Charlotte. You are a pathetic excuse for a woman.

“I’m scared, Molly, all the time.” Until she couldn’t breathe sometimes. “You know why.”

“I miss out on so much because I’m scared – and the thing is, I’m intelligent enough to know it.” To be painfully aware she was living in a cage of her own construction. “That just makes it worse.”

Like I said above, I usually have a hard time with main characters that can’t see their own self-worth, but my experience with Charlie was much different. Every time she admitted her weakness, it made me want to squeeze her tight, kiss her cheek, slide her in my pocket and slay her demons for her. She’s far from perfect and she knows it all too well, but she grows so much throughout this novel and it warms my heart every time her gorgeous T-Rex helps her overcome her terrors.
I want a T-Rex like Gabriel

Oh god, T-Rex. I will try my best to describe his character without catching my computer on fire. Gabriel is not your average CEO. Well, in some ways he is, but in others he is far from average. He’s the demanding, bossy, stubborn man who I’ve come to expect in a romance hero CEO, but he also demands his employees to reach their full potential as well. He’s completely terrifying but he’s also surprisingly gentle.

What Gabriel had discovered today was that the mouse wasn’t only hardworking but also highly perceptive and had a keen intelligence. In the minuscule fractions of time in which she forgot to be terrified of him, she’d… sparkled.

An intriguing mouse was Ms. Baird.

From the beginning of the novel, it is clear he is doing his best to manipulate Charlie into coming out of her shell being the mouthy woman he knows she is under all her fear and self-preservation. Now, I know it sounds like he’s trying to change her, but he really does love who she is and is trying to show her not to be afraid of speaking her opinion around him. He loves to goad her into snapping at him and it is hilarious to watch! Oh, he’s also got the sexiest, dirtiest mind. *swoon* If I didn’t want Charlie to finally get her man, I would be so jealous.

Here are just a few of my favorite sexy quotes from him:

Gabriel put down his wineglass and then he smiled that slow, sinful smile that made her nipples go tight and her body grow even more silkily damp – if he’s demanded her panties as he’s threatened, she’s have failed the test. Miserably.

“Ms. Baird, no one is good or bad at sex by themselves,” he drawled. “It’s a team effort, and you know I’m a team player.”

Holy hell, it is so hot the way he calls her Ms. Baird. *shiver* Here’s some more yummy T-Rex:
Gabriel, his lips wet and his pupils dilated, said, “I like the way you make me feel better.”

And another because I just can’t help myself:

Deliberately reciting rugby statistics in his head, he said, “Ask me to fuck you, Charlotte.”
Her chest rose in a ragged inhale. “I can’t.”

She sank another inch onto him, her eyes fluttering shut. “I don’t know how to talk that way in bed.”

The shy confession blew the statistics out of the water. “Do it with me,” he said, pulling out all the way by lifting her off him, then teasing her with his eager cock. “Say ‘Fuck me, Gabriel.’” The idea of the words falling from her lips shredded his remaining control. The only reason he didn’t snap was because the need to protect her was stronger than his lust, stronger than anything.

Okay, woowza! I’m gonna have to stop because I don’t think my keyboard can handle anymore T-Rex hotness. *fans self* Basically, the man is way too hawt and YOU MUST read Rock Hard. NOW!