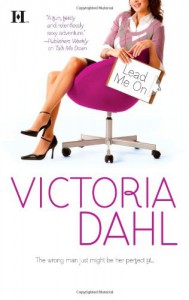 I have been a fan of Victoria Dahl’s Tumble Creek series for years, so when I stumbled upon a copy of Lead Me On, in my favorite used book store, I was quick to snap it up. It was the only book in the series I had yet to read and I had a great time.

Jane Morgan is the uptight and in-control office manager at Jennings Architecture. She and Chase meet as he comes to pick up some project materials from his latest excavation project. Jane is instantly attracted to the Chase, but is firm to dismiss as a blue-collar worker and wants nothing to do with him. She is determined not to be like her mother – a woman who spent Jane’s childhood chasing after long-term prisoners as husband material.

I’m not going to lie, Jane was not my favorite character – at first. She begins as the type of main character I cannot stand – preachy, snobby and discriminatory against everything low-class, even her own family. The only person she looks down on more is herself. She’s trying to be someone she’s not, someone “respectable” and spends a lot of time beating herself up about things she can’t change. It’s sad how hypocritical she is, but her saving grace is she shows tremendous growth throughout Lead Me On, thanks one tender-hearted bad boy named Chase.

Once her past is finally revealed, I began to understand why she is so hard on herself and why she’s judgmental. It takes a while, but she slowly learns grows past her fears and pain and develops into a woman who I could adore. And Jane sure is a sexy woman when she stops acting like the woman she thinks she should be and learns to be herself, no matter what. :)

“Too warm?” he asked. Apparently she was way past warm, because she stopped in the middle of the room and reached for the bottom of her shirt, not even pausing before she whipped it over her head. “You were right.”

“Oh?” He couldn’t say more than that. His throat was closing up as his eyes sent images to his brain.

She reached for the side of her skirt and unzipped it. “I do want you as my birthday present. Is that insulting?”

Chase is not fooled by Jane’s prim clothing and haughty demeanor. He thinks she’s intimidating as hell and for some reason it really grinds his gears in all the right ways. He takes her rejection well but can’t help but flirt every time he comes in to the firm. He’s ecstatic when Jane seems to have changed her mind about seeing him and boy do they heat up the sheets together!

“Damn,” Chase repeated, this time with a smile. “You should be arrested for hiding under all those clothes, Miss Jane. You look like a wet dream walking.”

“Oh yeah? So you think it’d be a good idea to show a little cleavage to the surveyors. You think they’d like the view?”

She curved her hands over her breasts and squeezed lightly. “What about the contractors? You think they’d like the view?”

“Yeah, I think I’m gonna buy you some baggy cardigans for your birthday.”

I loved everything about Chase. He has that sexy bad boy swagger that pushes all of my buttons, but he’s also a sweetheart and way more sensitive than you’d usually see in a bad boy character. And the best thing about him? He always calls Jane on her shit, even though he sympathizes with why she’s the person she is today. It’s refreshing to see a hero not take any crap because he cares about his woman.

“…you were right about one thing. Nothing’s changed. The way you feel about me hasn’t changed, and I still love you. But that doesn’t mean I have to take this kind of shit. I’m going to go and you can call me when you’re ready to talk like a grown up, all right?”

While I initially had some issues with Jane, she wormed her way into my heart and made me change my mind. Lead Me On turned out to be a sexy, surprisingly heartbreaking read and I can’t wait to read more from Victoria Dahl!