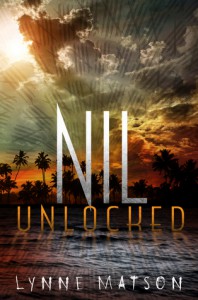 Warning: If you have not read Nil, I do not recommend reading Nil Unlocked until you have. While the story would work okay as a stand alone, its best to experience this story as a sequel as some of the important aspects of the setting will probably be lost to you.

Boy, what an emotional roller coaster! Lynne Matson took me on a nail-biting, action-packed adventure that I could never have dreamed up in a million years. Nil Unlocked was the perfect sequel to Nil, and I regret that I put off reading it for so long!

"The ground shook like Hadies had lost his temper.
Or his favorite toy. Or both."

Nil Unlocked began on Nil in the exact place we left off in the previous book, with a stunned Rives and an angry grizzly bear. It was wonderful to be back on the island, but it soon became clear that Nil has changed in scary, unpredictable ways. As exciting as it was for me to be back, with Rives as Leader of Nil City, fear and anxiety soon warred with my excitement as my concern for the characters grew. Nil is no longer what it used to be and all the rules that the teenagers learn to survive by seem to be changing drastically. While I was overjoyed by the happy ending of the first book, it brought about some irreversible changes to Nil that the teenagers have to survive, along with Nil's unexpected and seemingly deadly reaction to Skye's sudden presence.

While Nil Unlocked is very similar to its predecessor, it's very different in the best of ways.

For one, the island felt like a completely different place. The havoc Nil wrecks in this book made Nil island of book one look like cake compared to this one. It was like coming home one night to finding your house changed into a huge ass mansion, and you have to learn how to navigate it all over again. It's not a bad change, but its a hell of a surprise that makes you wonder if you're really just going insane.

Unsurprisingly, the edge-of-your-seat danger sky rocketed (no pun intended) and the complex and impossible mission Skye an Rives faced made for a slower building romance than the first book offered, which I totally understood. They had a few more concerns that were more important than playing kissy face. It gave me more time to get to know Skye and Rives as separate main characters and I began to question who really was the bigger bad ass; the new Leader of the city that is determined to make sure every one of his charges survive or the newest addition to the group who seems to have more skill, bravery, and self-awareness than any teenager in her place would?

Not only is there more danger and romance, but a new group of Nil inhabitants are revealed to the survivors that adds more complexity to the mysterious existence of Nil (as if it weren't complex enough to have a random island that doesn't show up on a map that magically kidnaps teenagers) and with the new inhabitants, came new questions about the origins of Nil. So much happened in Nil Unlocked that I would have felt lost and confused with a less talented author, but Matson managed to reveal answers, new challenges, and more questions in crazy complex world-building, but easy to follow writing. It couldn't have been an easy feat and I'm mightily impressed!

This is the second novel I've read from Matson and its becoming clear that she enjoys creating heroines that are bad-ass but down to earth enough to enjoy. Skye recently moved in with her astrophysicist father after her mom left for a new dig in Africa. Her father is also a survivalist obsessed with the weird and unexplained, which so happens to help Skye adapt to living on a nonexistent island where your days are literally numbered fairly quickly. She understands Nil and it was nice to have a main character who knows what she wants and has a no-nonsense attitude about going after it.

"I'd now spent 241 consequative days in this deadly arena, more conseqative days than I'd spent in any place ever. Staying in one place so long implied roots, at least to me. But I damn sure wouldn't call Nil home."

Rives has been a fast favorite of mine since I met him in Nil. He's a handsome devil who has a wicked sense of humor that is unfortunately dampened a bit in Nil Unlocked. I wasn't disappointed, because who wouldn't find face a personality change in a new and intense responsibility. Oh and don't forget that impossible new mission that he's supposed to help with - before his 365 days are up. He is dealing with a painful loss and a new, and fierce attraction to someone who seems to have more secrets than Nil. This boy does not have it easy, I'm afraid.

As you can tell, I really loved this book. I loved the crazy new changes that I didn't see coming, the character development, the world building and most of all, I loved how personified Nil became as the story developed. I learned a lot about the characters and the island and I'm impatient (and terrified) of what Matson has planned for the characters in Nil on Fire. This book was fantastic and I recommend it to any and all readers who love adventure, danger, romance, and adversity.The year has just started but I can already tell Nil Unlocked is making it on my 2016 Top Ten Favorites list!